Some places beckon and call you to them, with some you start a love-affair the moment you see them…and then, yet, very strangely, some of them refuse to get out of your mind and they just stay there becoming more and  more closer to your heart for no apparent reason.

New York beckoned last December. Excited research and bookings began. The weather was not going to be at its best, but all the same, tickets for a Broadway show were bought, good seats to see the Radio City rockettes were reserved and tours were booked. Since I always like to get under the skin of a new place and I think a walking tour with a local is always the best thing to achieve this, I booked a 6 hour intensive New York walking tour. It was to take me from the meeting point on Times Square to Columbus Circle, into the Central Park…and then it came to the interesting parts – Little Italy, China Town, Tribeca, 26/11 Memorial, Greenwich and Wall Street amongst other things. I couldn’t wait for the first part with the Central Park to get over! I am not one for parks and nature.

We stood in our little touristy group at Columbus Circle listening with attention to our guide. From there he led us up Central Park west road to the Trump Hotel letting us in on the exploits of Mr Trump and his empire. Gradually, we turned right and we were in ‘the” Central Park. If you know your park well, you would know that this part of the park – the south of it is mostly open fields and you have a view of the brown mid-town buildings from here. The air was cold and nippy and my brain was getting frozen. I put my head down and walked on with the group till we crossed half the breadth of the park until the Centre Drive and on to the Mall. ( this is a picture of me looking unhappy at this point) 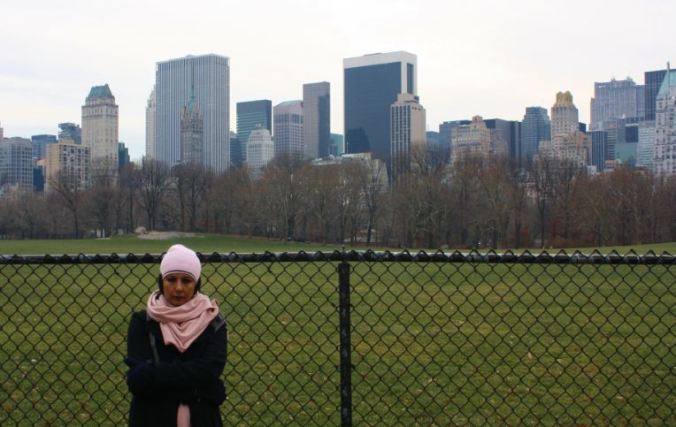 I lifted my head and looked at the tree-lined Mall. Something within me changed at that magical moment. I will never know why it happened. Perhaps it was the calmness of the bare branched statuesque trees, or was it the lovely copper yellow leaves on the side or was it the absolutely soul-stirring music that wafted out  of this man’s Saxophone. It was a conspiracy for sure. I suddenly became aware of all the colours and the sounds around me as I stopped to admire this little resident of Central Park. 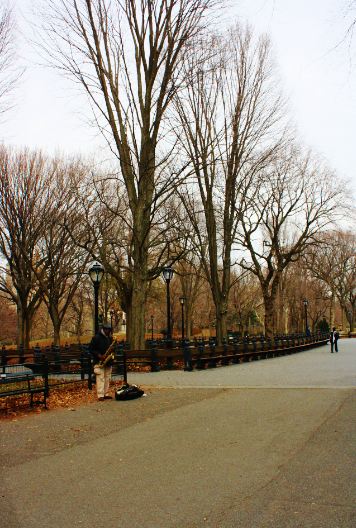 Central Park is the largest metropolitan park in the world with almost 3.4 sq kms spread. A group of wealthy merchants and businessmen – way back in 1853 – gave seed to the idea of this park. While India fought its first battle of independence in 1857, a competition was announced to select an architect-designer who could give a beautiful shape to this vast piece of lowlands-marshes and otherwise shanty-land. The team comprising of Frederick Law Olmstead and Calvert Vaux won the competition with their plan which they called the Greenstead. And thus began the immense, laborious work on the Central Park to convert their dream into reality. Not only was the terrain hard to tend but there were other problems such as evacuation of settlements of immigrant villages. By the late fifties-early sixties, the park started to receive visitors. And to this day, the ever-changing face of Central Park has been welcoming residents of New York, concert-goers, tourists, cyclists, skiers, skaters, walkers, joggers and people like me who come and fall in love with it.

We walked on, under the trees in the Mall until we reached the Bandshell and then the Bethesda Terrace. I am not going into the design and the history of these two constructions but the atmosphere was so full of life. There were musicians playing, having an impromptu concert and I even saw a home-recording of a dance audition for a popular TV show. Everyone was just, so “at home” like they had a time-share ownership of that patch for that hour. 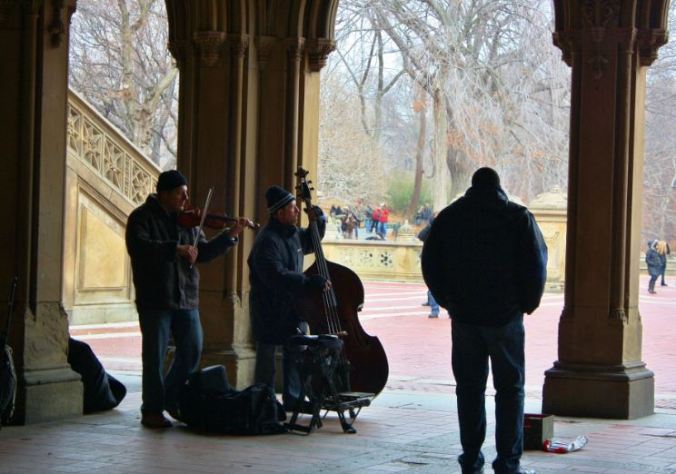 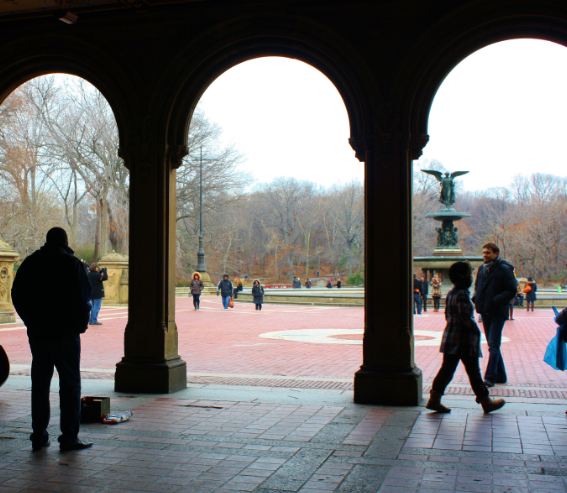 We then turned left towards the Bow Bridge. I just could not get enough of it. I took pictures of it, I went on it, off it and all the while I couldn’t take my eyes off it. (No wonder then, that, when 6 months later, Emirates Airlines ran their “Guess the City” campaign and featured the Bow Bridge for New York, I just jumped for joy almost like they had featured my best friend). There was again, something about the frozen lake behind it, the ash-whiteness of the bridge, its gentle curves and the colours all around it that held me spell-bound and the imagery has stuck with me. 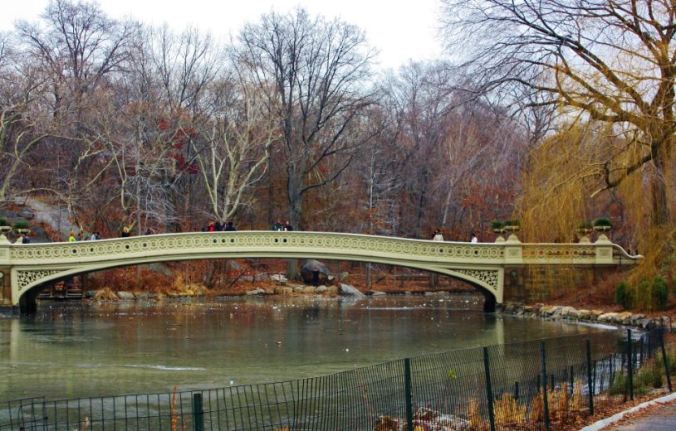 The walk from the Bow Bridge to the Strawberry Fields was one of sheer delight of discovery of the Central Park benches. I learnt how one could donate and dedicate a bench in someone’s memory or just for love. It was absolutely lovely to read some of the emotional, funny, abstract, sentimental messages on the benches. I have some for you: 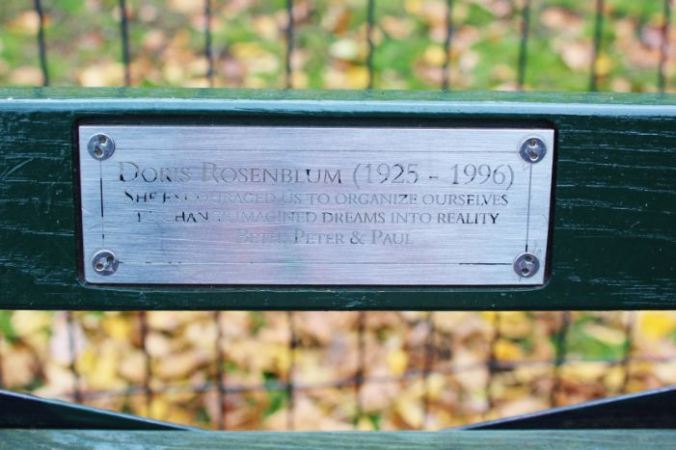 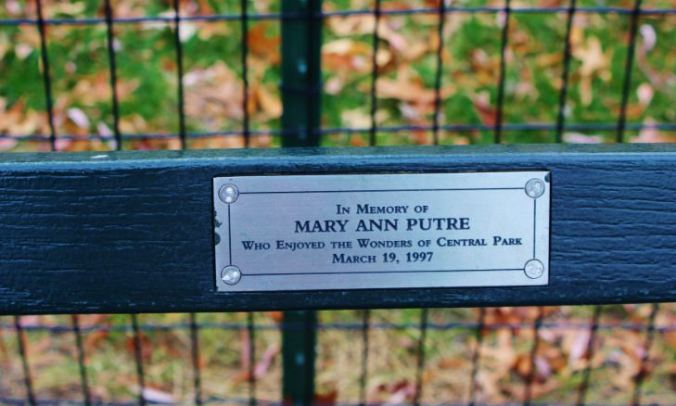 And then, we arrived at Strawberry Fields. Perhaps I was the most poorly informed resident of this planet but I admit I did not know that the memorial to John Lennon was in Central Park and was called Strawberry Fields. As you stand there, you can see the 5 storey Dakota Apartments across to the left. The top corner apartment is where John Lenon and Yoko Ono lived. It was while entering this apartment from the ground floor, that, Lenon was shot dead in December 1980. Yoko Ono wanted a “living” memorial for Lennon and she chose this tear-drop shaped patch of land that was named Strawberry-Fields after the famous Beatles song. There are plants and flowers donated by many countries that are grown here and right at the centre there is a beautiful mosaic arrangement with the words “Imagine”. You can see many of Lenon’s fans leave flowers and wreaths for him over this mosaic. The silence and the peace of the place and its beauty is indeed a very rich tribute to the peace-activist that Lennon had become in his later years. 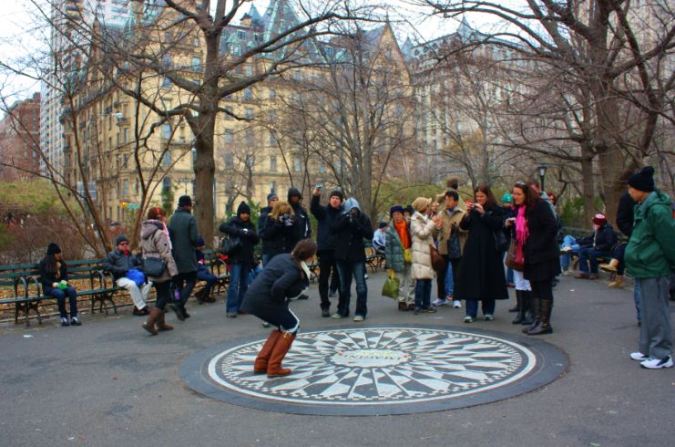 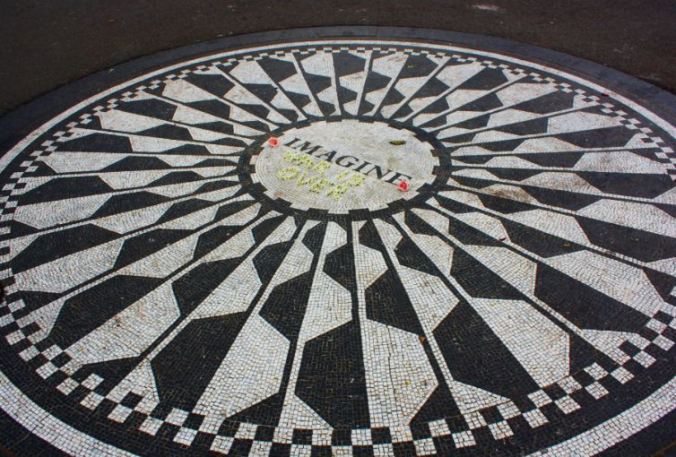 From here, we went on and out of the Park towards the Dakota Apartments and then down below to be swallowed up by the New York Metro. But I left a piece of my heart behind, somewhere between the Mall, the Bow Bridge and the Strawberry Fields. After I came back home, I have been consumed by this patch of 843 acres to be precise. I have dug up its history, I have downloaded and read bulky PDFs, I have stared at picture albums…and slowly made it a big part of me. I was also surprised to see from the map that I actually covered a very small part of the Park and yet it left such an impact on me.

Now, I have stopped questioning the attraction. Some places do this to you. The beauty and the soul of that place resonate with yours. It opens its arms and welcomes you. it calls out to you and falls in love with you. You can feel it. Yes, I know it in me – Central Park loved me.

One thought on “The Central Park loved me!!”